Making selections is often the first step to performing a range of operations. See Selections Logic for more information about how and when to use Selection Mode.

The Picking Level in Mol* controls to what level a selection or highlight interaction is applied. Specifically, a selection/interaction can be extended from a single atom to a residue, chain, entity, model, or structure. The default level is residue. For the case of structures with symmetry instances, the interaction can also be extended to include all atom, residue, and chain instances of the clicked atom. In addition, the Picking Level determines the specificity of a selection in the Sequence Panel, or the specificity of the focus in Default Mode. The Picking Level menu can be changed via a menu in the Selection Mode toolbar located at the top of the 3D canvas. 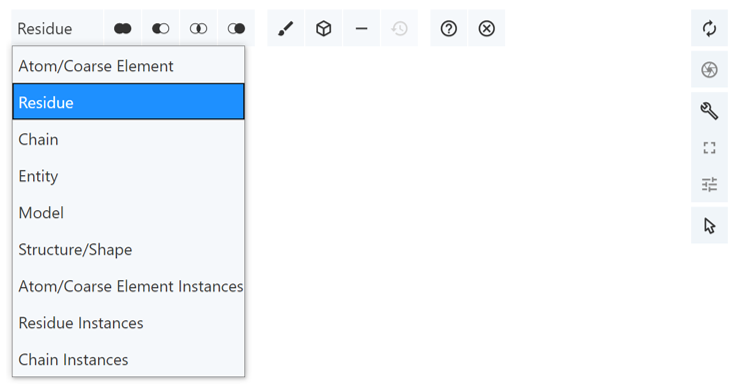 Making selections in Mol* allows for many operations to be performed. Although there are several ways to make selections, the first step is to enable Selection Mode using the cursor icon in the Toggle Menu.

After activating Selection Mode, the easiest way to select is to click on objects in the 3D canvas or the Sequence Panel. Changing the Picking Level makes selections more fine (e.g., selecting atoms) or more coarse (e.g., selecting whole chains).